On Sunday 13 July our father rector installed a new icon, an icon of the Most Holy Theotokos, named the Gatekeeper, in the centre of the church. 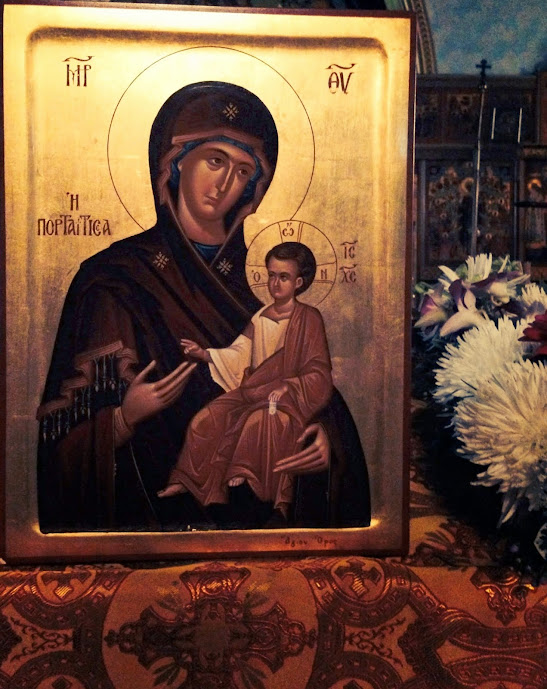 This icon was executed and consecrated in Athos, the Greek mountain monastery, and was recently offered to a pilgrim named Valery with the instruction to leave it in the first church where he would pray. Thus, this icon of the Most Holy Theotokos Portaitissa of mount Athos  ended up in our place a few days ago. Father Anatoly accepted this gift with the gratitude from the whole parish. We need now to make a kiot for this icon, which will be hung in the left transept of the church.

This same person had previously offered our church an icon of the Holy Matron of Moscow and  funded the making of a kiot to enshrine it.

We warmly thank all those who financially contribute to adorning our cathedral. We wish everyone to benefit from the spiritual help and the intercession of the Theotokos.

It is with heavy heart that we announce the passing of Vera Olshefsky (born Desatnyk) on February 19 at the age of 80 years old. Left to mourn is her loving husband of 62 years Charles, son’s Bill (Joyce) and Tom (Lucie) as well as Baba to Alexandra, Andrei & Elisaveta, along with her brother Walter. Vera was a Baba to many.

Her ability to find the best in everyone was only surpassed by her natural strength as well as her candor in telling it as she saw it. BIG THANKS go out to all of the staff & volunteers at the Montreal General Palliative care facility. They all became an extended part of the family these last few weeks and will be fondly remembered. Vera was a rebel with a cause and she always ensured that her family came first. It is now time to return the favor. Vera’s final resting place will be at the Mount Royal Funeral Complex 1297 Chemin de la Foret, Outremont, Quebec. Visitation will be on Monday February 24 from 4:00 to 9:00PM. Panachida will be at 7:00PM. The service in the Mount Royal Chapel will be on Tuesday February 25 at 11:00AM. Burial & reception will follow the service.

In lieu of flowers, the family would appreciate if donations in Vera’s name could be made to the Palliative Care Unit of the Montreal General Hospital.

END_OF_DOCUMENT_TOKEN_TO_BE_REPLACED

Our long-standing parishioners Kulakov – Alexei and his son Dionysius – donated to our church in 2004, our decorated forged metal fence around the church. They also installed a fence between the rectory and the parish.

END_OF_DOCUMENT_TOKEN_TO_BE_REPLACED

In 2011 we started our fund-raising to collect funds for the repair of the Cathedral roof. The amount of $50K seemed unrealistic to achieve at that time, though the roof was already in such a critical condition that, unless urgent measures were taken, it could have caused us higher costs  in the near future.

The fund-raising has been going on for a year – through our parishioners’ private donations, allocations from parish concerts and other events, as well as dinners organized by the sisterhood. We have managed to collect forty-two thousand dollars and the Church committee made up for the missing sum so the work could start as soon as possible before winter sets in. The much needed roof repair is already in progress and it can be seen from the street by anybody. Apart from this, some routine works are currently on going in the altar to have both the inside of the altar iconostasis and the altar window painted. All these renovations have been made possible by to your kind donations and responsiveness – there is a mite from each of you in the beauty and the safety of the Cathedral.

The Church rector, Father Anatoliy, and the Church committee deeply appreciate your help and thank everybody for the ongoing support!